Save the biggest cheer till last 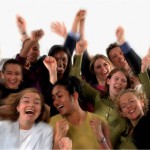 Have you ever watched a race when the person who came last got the biggest cheer? This week I have been lucky enough to be in Glasgow for the Commonwealth Games. I was lucky enough to see the opening ceremony, judo, triathlon, rugby 7’s, marathon, gymnastics, weight lifting and athletics. All of these were special in so many ways, a celebration of physical endeavour and achievement on so many levels. I expected to be excited and I wasn’t disappointed, the atmosphere in all the venues was fantastic but what struck me most was not how much the winners were cheered on, but how much even the slowest or weakest were encouraged. In the rugby for example when Australia were playing the underdogs Uganda out of the park, 50,000 people started shouting encouragement for Uganda. When they scored an unlikely try had it not been an open air venue the roof would have certainly come off anyway. It was incredible.
When we took our seats at the Hampden Park for the athletics we were just four rows from the front with a perfect view of the start line. It was great watching the first few races, but then the para athletes entered the arena and my excitement turned to feeling incredulous. First was the severely 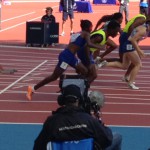 visually impaired or blind category. I watched in amazement as some of them even put on blindfolds to completely black out what little vision they had. Their guides carefully placed them in the exact position, and then tucked in next to them connected by a small strap. It was a women’s race but all the guides were male sprinters and it looked unlikely that they would be compatible, but at the gun they literally burst into action with each pair working together in unison moving as one entity. The athletes didn’t need to see where they were going, they trusted their guide totally and gave 100% commitment to crossing that line in the best possible time. If I was humbled by that experience (and I was) then out came the men’s 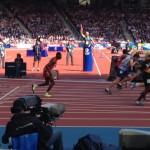 100m for athletes with physical disabilities. I watched men that could barely stand still with twisted or shrunken limbs line up, some couldn’t even get into the starting blocks; when the gun went off they each with their unique running style gave it their all as they raced to the line. The winner crossed to a large well deserved cheer but in the few seconds between him finishing and the last guy the cheering got even louder as this most amazing athlete who could not walk without a sever limp and with a clearly under developed arm crossed the line to literally rapturous applause. The crowd saved the loudest cheer for the last runner because it was just so humbling to see someone who has clearly overcome so many challenges give it his all and complete the race.
I wonder how many of these athletes had to overcome the limiting beliefs of others in terms of what they would have been able to achieve, no doubt they were at some point told “ you will never be able to …..” if they were given limitations, they clearly didn’t accept them as fact. Thank God.
It’s just so easy to make an excuse not to exercise, “I didn’t go for a run today because it was raining/ I had a headache / was too tired / ran out of time” etc etc etc….. and we take for granted that we will be healthy anyway. These athletes don’t have the luxury of taking their health or physical ability for granted, they have to overcome immense difficulty and challenge not just on race day but everyday. As an able person I am now ashamed when I think of some of the pathetic excuses I have sometimes made to justify not exercising. Next time I hear myself saying any of these comments, I will remind myself of what I have seen this week and tell myself in no uncertain terms, to shut up.
If you would like to learn some practical techniques so that you can be more motivated to be healthy or to lose weight and learn how to use your mind to change your body, then come along to CHAMPNEYS where I am starting my brand new 2 night and 4 night Mind Body Weight Loss retreats, and I will personally guide you through the process of using your mind to change your body. Alternatively you can read Think More Eat Less and follow the process using the techniques in the book and the FREE audio hypnotic downloads