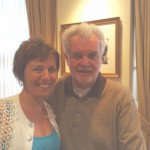 This week saw the passing of one of the greatest minds in the world of holistic healing. Dr Roger Callahan started his professional life in traditional medicine and went onto become an Associate Professor and a Research Clinical Psychologist. Over the years he became increasingly frustrated with the lack of an effective “cure” for emotional trauma. He described the traditional methods as simply teaching people how to “manage” or “cope” with emotional upset, and often said the most important thing he learned from this was “People can withstand more pain than they ever thought possible”.

He began what became his life’s work and arguably his life’s purpose in 1981, when he discovered whilst working with a client, that simply tapping on a specific meridian point can immediately and completely eliminate anxiety. In those moments a new therapy was born. Roger diligently worked over the following decades to develop what became Thought Field Therapy (TFT). The medical establishment rejected his claims of finding a “Cure” and he suffered years of personal trauma and hardship for refusing to comply with traditional thinking. Lynn McTaggarts says in “The Field” that “To be revolutionary in Science today, is to flirt with professional suicide”. Roger paid this professional price in the academic community; fortunately the holistic community saw the value of his discovery and embraced his concept.

I was lucky enough to train with Roger and to represent him and share his work in “Tapping For Life”, which he endorsed and generously wrote the introduction for. I never cease to be amazed at the power of TFT when I am working with clients and literally watch often years of trauma or anxiety disappear; I always give silent thanks to Roger when this happens. One such client who had been a policewoman at Lockerbie and had been haunted for years with horrific flashbacks, experienced complete and immediate relief from the memories and described the life changing power of TFT as “Magic without the wand”.

The concept of “Tapping” has been adapted by many others who have developed other “Tapping” based therapies such as EFT, but let us always remember that without Rogers genius and selfless determination, this amazing therapy in any form, would simply not exist. If you would like help or release from an emotional trauma, fear or phobia, I would be happy to share this amazing technique with you. You can email me janet@188.64.190.148 for more info or visit https://powertochange.me.uk/